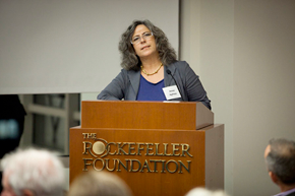 Anne Aghion is a sought-after speaker at universities, museums, film festivals, as well as institutes dedicated to areas ranging from the arts to policy to the study of science. Teaching has also become an important pursuit for Anne Aghion, with a special interest in countries with fledging film industries.

In the spring of 2012, she gave a TEDx Talk in Paris, France, entitled “Filming Unanswerable Questions from Rwanda to Antarctica,” and in November 2012, delivered the keynote address at the Stanford Interdisciplinary Conference on Conscience at Stanford University. She is regularly invited to screen her films at venues across the globe.

In 2010-11, Anne Aghion was invited to participate in two of the Andrew W. Mellon Foundation’s Sawyer Seminars on Human Rights, a series of nine seminars taking place over a year at different universities. The first, at the University of London, School of Advanced Study, was entitled “Fratricide and Fraternité: Understanding and Repairing Neighbourly Atrocity.” The second, at the University of Wisconsin-Madison, centered on the theme of “Vulnerability and Resilience: Rethinking Human Rights for the 21st Century.” Anne Aghion’s talks were on “The Role of Documentary Film in Peace- building.”

Over the past three years, she has led documentary filmmaking workshops at the Ecole supérieure des arts visuels de Marrakesh in Morocco and the Académie libanaise des Beaux Arts in Lebanon.