The Institut National de l’Audiovisuel (INA)—the organization charged with preserving and providing access to France’s audiovisual history has acquired a unique collection of footage shot between 2001 and 2009 by French-American documentarian Anne Aghion, during the production of her series of award-winning TV and feature films on post-genocide Rwanda. 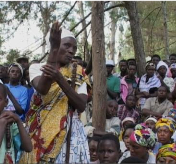 As part of the agreement, INA will provide a full copy of the footage to Aghion, for presentation to Iriba Center for Multimedia Heritage, an archival institution in Rwanda co-founded by the filmmaker.

INA will digitize and enhance the archive and provide global access to some 550 tapes, making up 350 hours of footage. The material was shot primarily in a single rural village, as the Rwandan government put in place the “Gacaca,” a system of community-based tribunals established to judge crimes dating to the
1994 genocide, which claimed 800,000 lives over the course of three months.

The archive is available at http://www.inamediapro.com/collection_partenaire/rwanda.html 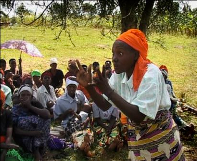 Aghion’s footage is a unique documentation both of Rwandan history, and of a population in the throes of nearly a decade of social reconstruction. About one half of the collection comprises open-air trials, with the rest made up of one-on-one interviews of survivors, defendants and witnesses.

Filmed outdoors, as well as in locations including a school and local lock-up, this material shows, for the first time, the long-term process of re-weaving a community’s social fabric after a cataclysm on the scale of the Rwandan genocide.

The footage is mainly in the Kinyarwanda language, as well as in English and French. The materials are fully translated into English, indexed to time codes every 10 to 15 seconds at most.

The agreement with Aghion is part of INA’s policy to expand its collection, and to engage in international cooperation for the preservation of audiovisual heritage.

According to Michel Raynal, Deputy Director, Heritage Collections, “These recordings, compiled with persistence, and made completely outside of the context of breaking news, contribute to the development of common memory. It is precisely within INA’s mission to collect, safeguard and provide access to this memory for new purposes, be they professional or scientific. Taking on this archive was an obvious decision.”

Audiovisual materials are an important part of any country’s historical and cultural legacy. But in Rwanda, more than anywhere else, less than a generation after the most efficient genocide of the twentieth century, these resources will play a critical role for future generations.

Indeed, well aware of the historical value of her footage, and intent on making it freely accessible in Rwanda, Aghion joined with social psychologist and historian Assumpta Mugiraneza, to launch Iriba Center for Multimedia Heritage. With Mugiraneza serving as Director, and Aghion as Co-Founder and Honorary President, Iriba Center will gather films, photographs and audio recordings dating from the start of colonial rule in Rwanda to the present day.

To further this end, once the digitization and the indexing of the footage is completed, INA will provide a copy of the entire collection to Aghion for Iriba Center.

Says Aghion, “I spent several years looking for the best institution to place this archive. Then I landed at INA, which is the perfect place, really, with their dedication to preservation and their international reach, INA is by far the best-suited to house these images.”

ABOUT ANNE AGHION AND THE GACACA SERIES

Immersing herself in a small community in a remote area of rural Rwanda, filmmaker Anne Aghion spent nearly a decade capturing the accounts of survivors and perpetrators of the 1994 genocide, shedding light on the emotional journey to coexistence, and giving witness to the process of judicial and social reconstruction.

Aghion and her team shot these 350 hours of footage in the course of producing what would become The Gacaca (pronounced Ga-TCHA-tcha) Series, four documentary films produced for television and theatrical distribution.

They are: “Gacaca, Living Together Again In Rwanda?” (Unesco Fellini Prize, 2003); “In Rwanda we say…The family that does not speak dies” (Emmy Award, 2005); “The Notebooks of Memory”; and most notably, “My Neighbor My Killer,” (Nestor Almendros Human RIghts Watch Prize, 2009), a feature film which screened in Official Selection at the 2009 Cannes Film Festival and, since then, in numerous countries around the world, including Rwanda.

The Gacaca Series earned strong praise from the press, including “Seminal” from Variety, and “Deeply moving” from The Washington Post. Le Monde called it “Universal theater. Riveting”, and Mediapart wrote “Exceptional.”

Aghion is the recipient of numerous prestigious awards, including a 2005 Guggenheim Fellowship. In 2008, she released her feature film, “Ice People,” co-produced by Arte and the Sundance Channel, which explores the personal and emotional challenges of scientists in the extreme environment of Antarctica.

INA, founded in 1974, gathers and preserves the images and sounds, which form the basis of our collective memory.

It authenticates them, gives them meaning, and shares them as widely as possible through its collections and its expertise. The world’s number one audiovisual centre for digital archiving and archive enhancement, INA has become the watchword for technical innovation in both these fields.

Otherwise, since 2006, Ina is diversifying the means of transmission of its contents to the public: site Ina.fr, mobile, Connected TV, Video on Demand (VoD)… learn more: http://www.institut-national-audiovisuel.fr/